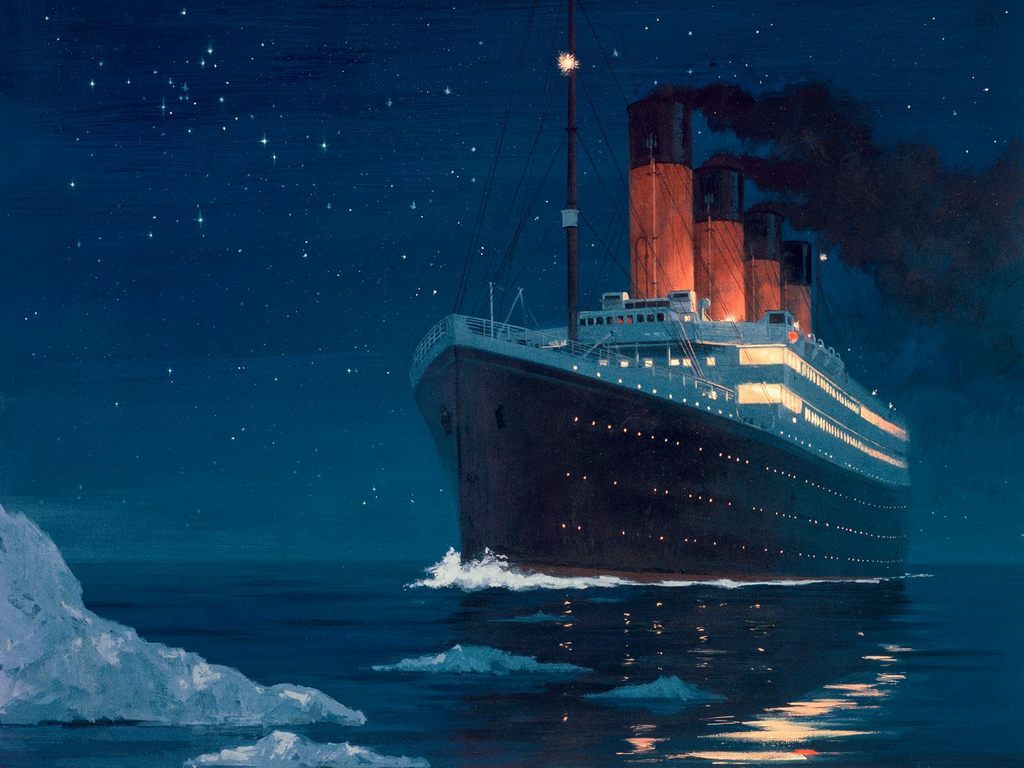 *Disclaimer: This is a conspiracy theory and is not to be taken as fact. It does not take away from what happened to the 1,500 individuals who lost their lives that tragic day. It is possible some evidence found online is not true, but I encourage you to take a look for yourself after reading this and come to your own conclusion whilst keeping an open, healthy mind when researching theories such at this.
April 14th 1912
At around 11.40pm, the bridge received a phone call “Iceberg, right ahead.”. The warning message came too late and the iceberg was unavoidable. The glacier tore the side of the ship, filling it with water at a pace too rapid for everyone to escape.

As the once calm water began flooding in, six of the watertight compartments at the front of the ship’s hull were breached, five of them were flooded within the hour.
April 15th 1912
At 2:20am, the RMS Titanic now sat at the bottom of the Atlantic ocean claiming over 1,500 lives. 705 people survived.
To this day, people are still captured by what happened and many believe the Titanic sank not because of the iceberg, but because of a fire on-board. There are many other theories out there which people believe that make for a rather shocking speculation. The ship that sank was not Titanic, but it’s sister ship, the Olympic.
WHY?
J.P Morgan financed three ships: the Titanic, the Olympic and the Britannic. But the two sister ships Titanic and Olympic were actually very similar in many ways. The Olympic had many issues with their electrics and within months of its launch in 1911 (a year before Titanic), it had two serious collisions.
One of them was with the cruiser HMS Hawke which happened off the coast of the Isle of Wight causing serious structural damage to the Olympics’ keel and steel beams. This eventually lead to the ship leaning slightly to the left.
The Royal Navy investigated the crash and came to the conclusion that it was the Olympic that was at fault, thus giving J.P Morgan a massive insurance to pay off. Rumour had it the insurance would cost him millions and Moragn could not pay such money. Because Titanic had larger insurance, he devised a plan to switch the Titanic with the Olympic, crash the ‘Titanic’ and claim insurance on the ship.
The Olympic was so badly damaged it was written off and docked in Belfast where Titanic was being built. 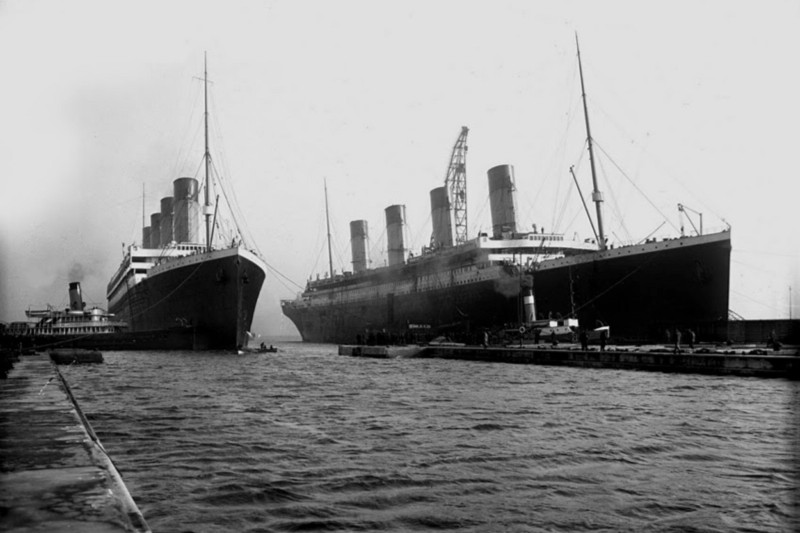 After Titanic sank, the US Senate and the British Board of Trade held a hearing. The White Star officials reportedly said that they thought the ship was unsinkable and if it were to sink it would take hours if not days for the whole boat to fully sink. They thought they had plenty of time to get all the passengers off the ship and to safety by the time the ship fully submerged into the water but as we all know, this was not the case.
THEORIES
Many believe it is too much of a coincidence for a ship that was known as the  ‘Unsinkable ship’ to sink claiming thousands of lives.
As said above, the Olympic (because of the collisions) started to lean slightly to the left. Many noticed this about Titanic too but why would this be considering it was brand new ship?
Over 2,000 people were on board and there were only 20 lifeboats meaning the chances of you surviving were slim, especially if you were a man as they saved women and children first. Some even say they claim to have seen the words the ‘Olympic’ written on the sides of the life-boats. Did they forget to switch it or did they run out of time? Perhaps they just used their lifeboats since the Olympic was written off.
When being built, the Titanic had 14 portholes but the Olympic had 16, yet when Titanic set sail, it also had 16 portholes,  just as the Olympic did. This was disproved as an extra two were added for more light and air. But many disagree saying it is a cover up for the switch.

It has also been reported that just FIVE days before her maiden voyage, Titanic’s insurance was increased by J.P Morgan from $5 million to $12.5 million. As the ship did sink, Moragn received the whole $12.5 million for her. But, there is actually no concrete evidence of this. If Titanic was insured less than a week before she set sail, alarm bells would have surely gone off, thus disproving this theory but many still believe that because J.P Morgan was so high up, he bribed them into staying quiet for a share of the money.
Morgan along with many other famous individual’s such as Milton Hershey and Norman Craig were scheduled to sail on Titanic, but cancelled last minute. A New York Times reporter discovered this to be a lie, Morgan was actually seen perfectly well with his girlfriend/wife in France on the very day Titanic sunk. Yes, maybe he could have recovered within 3 days but if he was that ill he had to cancel, surely 3 days to fully recover is too short? Could this have been his a way out, to ensure his safety after hearing the rumours of the switch?
The creation of Titanic was set to make hundreds of jobs yet they were struggling to get people in. At the time, there was a Coal strike, meaning people were out of work and not earning money. So why would you not want to be on Titanic – the world’s largest ship that everyone is talking about. Would you not work anywhere,  especially since you lost you’re job?
When James Cameron was looking for Titanic, he took this picture of the side. Here, you can see the letters MP, just like the Olympic perhaps? Could this be real or just computer generated, but why would they fake this? It was reported that the SS Californian was close to where the Titanic sank but the ship had no passengers. Instead, they had 3,000 woolly jumpers and blankets as if they were waiting for a rescue mission – the sinking of Titanic? The ship was reportedly build and designed to transport cotton but there is no evidence that it in fact only had ‘woolly jumpers and blankets’.
Despite being the closest ship in the area, the US Senate and the British Wreck Commissioner’s inquiry also concluded that the Californian could have saved many more lives, if not all of them. The theory here goes that because the Samson ship was between the Titanic and the Californian, the Californian thought Samson was Titanic and the Titanic thought Samson was the Californian.
The person in charge of the communications on the Californian was actually asleep so did not received the alerts from Titanic, resulting is a bigger loss of life. In 1898, a book called The Wreck of the Titan was published which makes this conspiracy theory even more interesting. In the book, the boat that sank was called the Titan which is similar to Titanic. It too had a shortage of life-boats and was described as ‘unsinkable’. To make it even weirder, they both struck an Iceberg and it happened in April.

Do you believe any of these theories or do you have other theories you believe? Perhaps you believe it was simply an iceberg that caused the sinking and it was not on purpose.
Share and comment below what you think!
I do not own any of these photos. No copyright intended.

This site uses Akismet to reduce spam. Learn how your comment data is processed.

Find out more or adjust your settings.

This website uses cookies so that we can provide you with the best user experience possible. Cookie information is stored in your browser and performs functions such as recognising you when you return to our website and helping our team to understand which sections of the website you find most interesting and useful.

Strictly Necessary Cookie should be enabled at all times so that we can save your preferences for cookie settings.

If you disable this cookie, we will not be able to save your preferences. This means that every time you visit this website you will need to enable or disable cookies again.